At about the 12th hour of the swim, Independent Observer Janet Hinkle returned from her shift on Voyager with good news:

“When Diana stops for a nourishment break at 8:40pm, it creates an opportunity (and a necessity) for divers to go in and look in the water, for sharks, for jellyfish, obstacles of any kind. Angel, the jellyfish expert, has a chance to look more closely, too. Diana stopped at 8:40 p.m. tonight, almost 12 hours into the swim, for 7 minutes treading water while she took in sustenance, and nothing threatening was sighted.”

“It’s a great night!” a crew member chimed in.

And there’s a correction: a previous quote was correct but it was from Bonnie Stoll, the head handler whose observations carry the most weight of all. She’s been with Diana on every swim of this stage of her life, the most recent three attempts of this 21st century and now this time, the fourth. And it was Bonnie who said at the 11th hour, “This is the first time we’ve ever reached international waters without a crisis.”

But now it’s the 13th hour when I’m writing this and there’s a storm to the east and a storm to the north, one of them just six miles away; whoops, now it’s 4.2 miles away says Captain Jeff. Conditions change so rapidly out here it’s hard to keep up. But fortunately we media folk aren’t the navigators, and we’re assured that’s all is so far manageable (as much as anyone can feel assured when the sky that was full of stars moments ago is now pitch black and the winds have gone up to 14 knots).

Diana, covered from head to foot in protective wear (see video where she describes that) seemed to become disoriented a few moments ago. (Who wouldn’t?!) The red light streamer she follows—it’s all that she can see and with the wave action how consistently well she can see it is anyone’s guess—is attached to a boom above her and the water drags it below her. I watched as the wind picked up and the little red light on her swim cap drifted many yards behind it. Of course, the kayaks, one always to either side of her with their shark shields, also with their own little red lights, kept with her as best they could—how lost and without recourse we would all be without the kayakers, it seems to me. But the Voyager escort boat, with Bonnie steady as a rock, blowing her whistle, calling to the swimmer through the darkness, made an about-face to come beside Diana again and Diana did her part to meet them halfway.

How she does so I’ll never know. How she can see through the mask and goggles in this black night! How can she hear (she can’t) with the water slapping her head and boat motors groaning. How could she call out if she had to within that silicone mask that extends all the way into her mouth? She can’t. But she can follow the streamer, most of the time. She can sense the calm, soulful kayakers who manage to stay beside her, most of the time. And she is connected to Bonnie, all of the time, a connection that runs deeper than the 3200 feet of ocean under her.

Whoa, a crash on our boat as it roils in the waves; it’s the dishes we’re all too busy to clean up crashing in the sink. Shall we call the Voyager to see how Diana’s doing? You bet. Alex de Cordoba, the webmeister, gets on the VHF radio to ask.

“She is doing remarkably well in that jellyfish suit,” reports Ops Chief John Berry. “And she is going at her expected pace in it, which is 47 strokes per minute.”

And now at the 14th hour, even the threat of the weather seems to be dissipating, and the lightning against the black backdrop suddenly illuminating a 360 degree horizon looks absolutely beautiful.

Join the Xtreme Dream Team! Show your support for Diana with a shirt, cap or wristband! 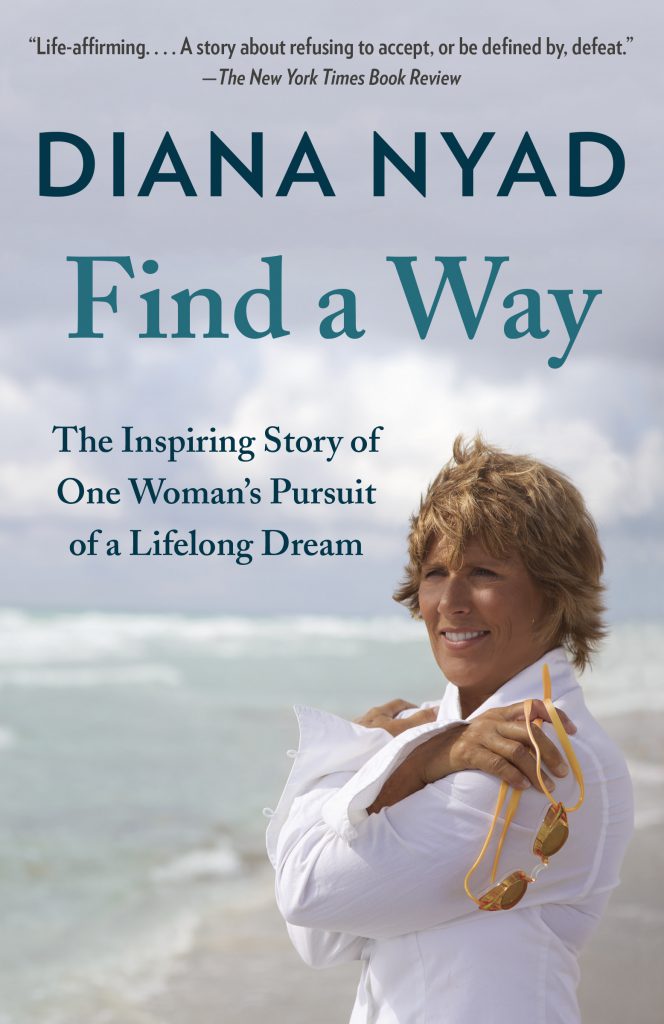